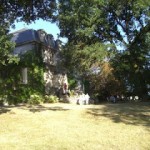 This is not a picture of some strange folly built by an early colonial in tropical Africa, although some of them did build some fairly extraordinary places in the middle of nowhere, but a shot of a French 19th century chateau that I have just been staying in with my family. The tenuous link with Africa is that my nephews put on a series of sketches as a finale to the holiday, one of which was all about going on holiday with my company Theobald Barber. It was a slight piss take on the exclusive nature of my trips but very amusing and of course it is always good to get a mention in one of the sketches. I have taken four out of five of the nephews on safari and they had rightly remembered some of the important aspects.

Actually this small ish chateau had a wonderful Park like garden as the French call them; with huge, mature trees that provided masses of shade in the rather hot Lauragais area of South West France. It had a rather Chekhov atmosphere which rather grew on us all. The owners rent it out although I think they may sell it soon.