Argentina vs Africa on wildlife drama 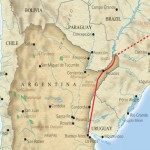 Not long ago I was on a boat right underneath a waterfall, one of the mightiest in the world, getting rather wet and having some kiddie fun doing so. A few days later I was gently gliding along a river in a raft-like apparatus seeing amazing birds and wildlife in a vast million-hectare wetland reserve. Soon after that I was trekking through a rain forest seeking jungle beasts and wondering at the devastation that man has caused in recent years by almost wiping out these once vast forested habitats.

As I usually write to you about Africa I could have been at Victoria Falls, the Okavango Delta, the rain forests of Uganda and Rwanda and the Congo. However, instead of exploring three or four countries I had visited just one (and a relatively small part of the north east of the country at that), namely Argentina.

Flattery can get you a long way: the Argentine and Misiones Province tourist boards wanted some shall we say high-end African tour operators to advise them on what they had to offer on the “safari” front – an invitation I couldn’t resist. I was intrigued as I had never been and had no idea that Argentina had any rain forest left, having only really heard of Patagonia as the place to visit for landscape and nature.

So it was that I landed at Buenos Aires on April 1st. We had to connect to a flight to Iguassu, but just as we were settling in our seats a loud retort was heard and the plane rocked a little too much for comfort. The equivalent of Gateway Gourmet Catering had just reversed into our 737… gate-crash catering on a grand scale! Fortunately, Air Argentina seems to have a ready supply of jets, and we were soon on our way in a replacement after only a minor delay.

So how does my Africa stand up to Argentina? 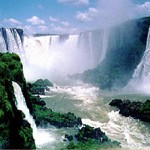 Iguassu Falls versus Victoria Falls: Iguassu is definitely wider and much easier to view, but it is split into a series of falls – 75 or 275 depending on whom you talk to. For sheer volume of water Vic Falls wins, being the largest curtain of water in the world. Iguassu is not as well known but it does have a big local market with lots of large hotels nearby. We found a delightful small lodge which fits the bill and is less expensive than its equivalent in Zambia. Niagara Falls is dwarfed by both, I should add. 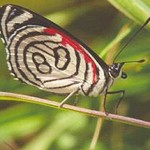 Rain forest in Misiones versus East/Central Africa:
Once what was an unbroken belt of the Atlantic rain forest running from around Rio down to Buenos Aires is now widely scattered. 94% of it has been destroyed since 1900. Africa wins on size easily (although practically speaking you can’t visit the Congo side), and of course you can go to the forests of Rwanda and Uganda to see the last remaining mountain gorillas. The Atlantic rain forest, however, is far more bio-diverse with 20,000 plant species, a huge variety of trees 50% of which are found nowhere else, 260 mammals (including the elusive jaguar), 200 endemic bird species and 2,000 butterfly species.

These latter were out in force during my visit, and I have never seen such a dazzling array of colours. The rain forest is one of the most endangered habitats in the world. On the basis of nature diversity, Argentina definitely wins. 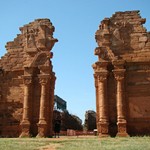 The extra dimension is the remarkable legacy of the Jesuit missions who arrived here in the early 17thcentury and held sway until 1768 when their influence was deemed to be too strong by the Roman Catholic Church and King Philip of Spain. We visited San Ignacio which was built in a jungle baroque style and once home to some 4,000 Guaraní people. They were controlled by effectively just two Jesuit priests who gave them protection from the marauding bandeirantes or slave traders from what is now Brazil. The film The Mission was about this area. 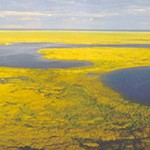 Ibera wetlands versus Okavango Delta: who has ever heard of the Ibera wetlands? The road less travelled it most certainly is, and as you fly over it you think it could be Botswana. Just to reinforce your misconception, some areas of the bush even have acacia trees. Big animals? Well, the Okavango wins hands down. Sightings of the jaguar in Ibera are almost as rare as one’s chances of winning the lottery, but you do get to see lots of capybaras.

They are the largest rodent in the world – not a particularly sexy claim to fame, but actually they are quite cute and have a comic-book air to them. They also only eat grass you will be pleased to hear. Even the rough equivalent of the Nile crocodile, the caiman (alligator) is almost tame in comparison. 500 species of birds does not quite rival the Okavango’s 800, but I was blown away by how easy it was to do serious twitching. You can also catch a dorado, one of the most powerful and ferocious fresh- water game fish in existence. You can ride out into the wild in both places, but in the Ibera you don’t need to be experienced (no need to know how to gallop out of trouble here!), and somehow riding out with gauchos does have more of the authentic look. There are only a handful of lodges which can compare with Botswana, so that makes my job easier too!

So should you go to this infrequently visited area of Argentina? On the safari front you have to work much harder here, but the natural habitat and birding are exceptional, and few tourists go anywhere except to the Falls. Logistically, if you fly into Buenos Aires and spend a few days soaking up the sights with some top guides, whizz up to the Ibera, continue through jungly bits and then visit the Iguassu Falls making an egress via Rio de Janeiro you will experience a diverse and fascinating holiday . A two-week holiday covering the above and three nights in Buenos Aires could cost from £3,900 per person including flights.

Oh yes, I now have a South American consultant called Rose Hill on board with many years of experience in South America who can create wonderful itineraries for you. Telephone: 0207 723 5858.