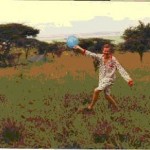 Someone said that as I have been travelling to sub Saharan Africa for well over twenty years and organize amazing safaris as well as holidays to off the beaten track beach places I should start a blog. Maybe I should start at the beginning:

About forty of us who had gone out to Kenya for a wedding ended up on a real “out of Africa” style safari in the Chyulu hills which is a couple of hours drive north of Amboseli National Park and a six hour drive or plane-ride south of Nairobi.

On the way into the camp we kept pace with lolloping giraffes. My first wild animals.

On Christmas night we were served a full scale Christmas dinner with all the trimmings in the middle of nowhere. We slept under canvas and it was simple but authentic. The next day I seemed to be in rather a happy mood. 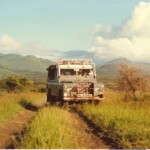 Some of us took land rovers and climbed much higher into this range of green hills. We stopped after an hour or so of climbing and a massive panorama lay before us. Layered hills to plains below and the mighty Kilimanjaro in the distance.

Before leaving for Kenya I was rather nervous about bugs, dirt and generally unsure. After that safari I was hooked and I had got another sort of bug. A wonderful yearning to be in the bush. Well over twenty years later I keep going back and visit various countries south of the Sahara a few times a year. 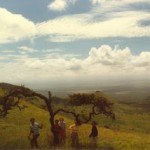 In 1992 my close friend Kate Theobald set up a small safari company which I took over the day to day running of a few years later.

I have stayed small and nearly all our clients come from referrals. So I take a very keen interest in making sure my clients have a good time on holiday. Because if they don’t they may not refer us to family, friends and colleagues!