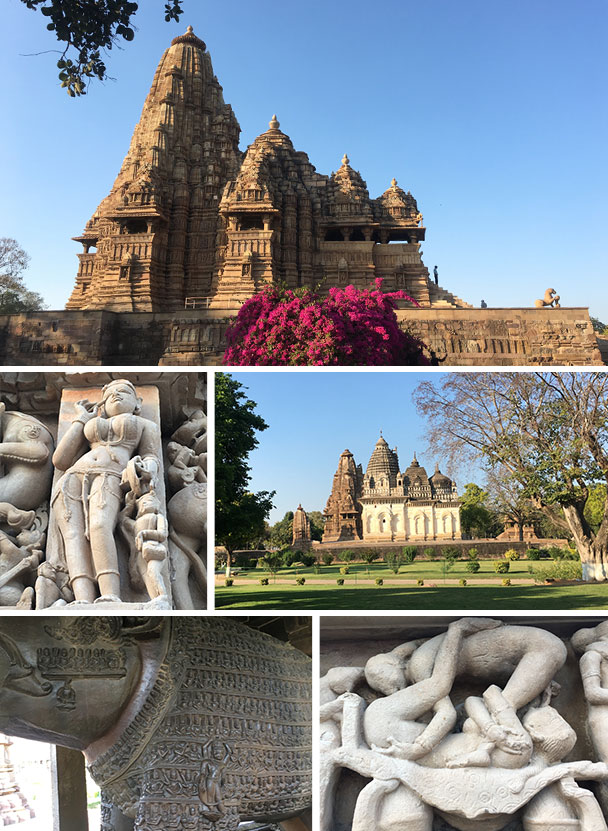 Whilst Christian teaching has at times inveighed against ‘the sins of the flesh’, the Hindu tradition celebrates karma or sexual desire as an essential part of life. Since these temples were built in the 10th century Indian society has become rather more conservative.

Of the original eighty-five shrines which comprised the original temple complex, only some twenty-five survive, my charming old guide told me. Originally surmounting platforms which stood in a vast man-made lake, the temples are now dark brown islands in a sea of green lawn. The intricacy of the carved friezes running around every tier of the temples’ exteriors is astonishing – gods, voluptuous handmaids, elephants, warriors and deer all being depicted in amazing detail.

Such is the thickness of the sandstone and the ubiquitousness of the decoration the whole seems to have been formed by some accretional process – as if one were to take an enormous lump of clay or sand and carve the temple directly out of it.

There is some evidence of vandalism and the occasional trace of decay and restoration, but the condition, clarity and freshness of the carving in general is staggering. It is difficult to comprehend that these highly sensual images celebrating the beauty of the human body were created at the same time as our earliest romanesque churches and fascinating to compare their robust nakedness with the shrouded female saints of Greek Orthodox art.

The carvings seem to defy everything – simplicity, balance, rhythm, symmetry and elegance – which we have been taught to admire in western art and have a life-affirming exuberance which challenges many of our assumptions about the purpose of religious imagery. 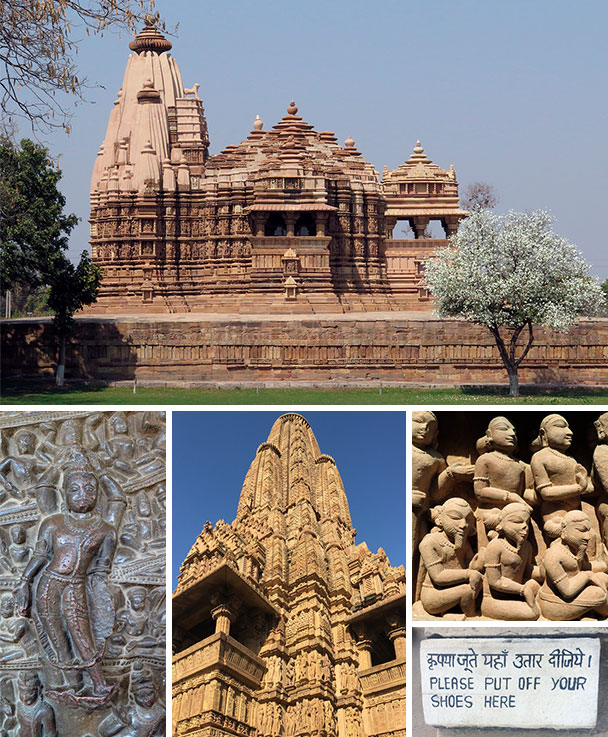 One temple on the outer perimeter is still open for worship, and it’s inspiring to see its being used as was intended, with noisy prayers, pilgrims ascending and descending the steep steps, and a sea of brightly coloured flowers and fruits spilling over the pavements.

A visit to these temples is the perfect entry point for the wildlife reserves of Madhya Pradesh. See part 3 to follow. We like using the Lalit Hotel here which is a tad bland inside but has well-kept gardens and good food.