A Sense of Place – India’s most holy city

The so-called three great As of the ancient world comprise Alexander the Great, Augustus, the first Roman Emperor, and a figure who is perhaps less well known: Ashoka the Great.

Earlier this year I visited Sarnath, a museum close to Varanasi or Banaras as it is also known, where you can see a remarkable stone sculpture of four lions. Commissioned by Ashoka over two thousand years ago, it has been a potent symbol for Indian peoples ever since and is now depicted on every Indian bank note and every Indian Air Force pilot’s badge.

Ashoka, who ruled from 268-232 BC, was unusual: whilst other rulers at this time maintained power through armed conflict, he spread the philosophy of Buddhism and its message of peace across the sub-continent and beyond. The four lions, each looking to one of the four points of the compass, symbolise the dissemination of Buddhist ideals throughout the world.

After his death his empire declined and the script he had used to promulgate his edicts of temperance fell quickly into disuse; it was only after his work had been translated and given prominence by 18th- and 19th- century British scholars that it was taken up by Indian nationalists such as Mahatma Gandhi who preached once again the importance of religious restraint.

There is a great deal more to discover about the fascinating story of Buddhism with our guides at Sarnath. After all, this is where the Buddha is said to have preached his first sermon. 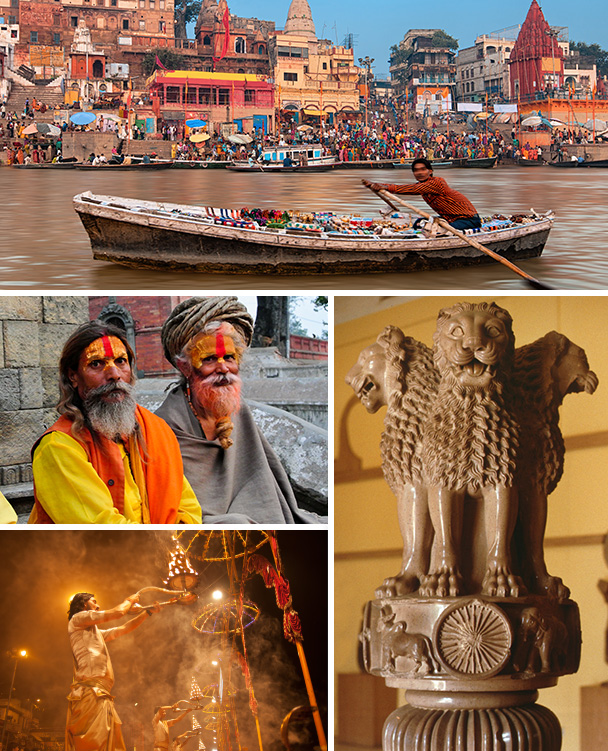 Whilst Sarnath helps one to understand the principles of Buddhism, there is no place like Varanasi for throwing light on the tenets of Hindu spirituality. Varanasi, the ‘city of death’ and the home of Shiva, the Auspicious One, is sacred above all other cities in India. Many of those who come hope that their visit to the city will be their last journey on earth: if your body is cremated here and your ashes are thrown into the river, you are ensured perpetual liberation from the cycle of rebirth.

Although during the reigns of the great Mughal rulers such as Aurangzeb and at the time of the British Raj with its numerous Christian missionaries Hindu dominance in Varanasi waned, it is now stronger than ever. Some 23,000 temples and over fifty ghats converge along an unbroken six kilometre length of the mother river, the Ganges — the longest length of ghats anywhere in the sub-continent. 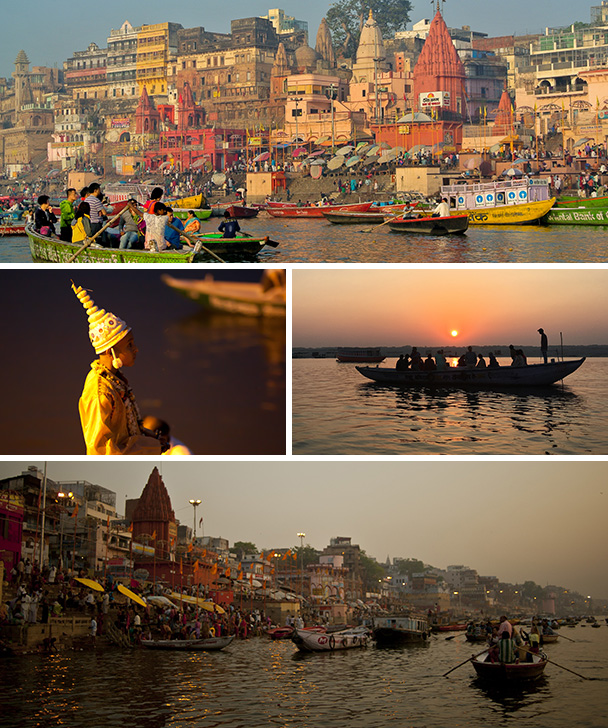 Varanasi is undoubtedly an unforgettable experience — an experience which it is not easy to digest or to understand. It is best to approach the cacophony and chaos of this great city from a distance, so I suggest that you arrive at my preferred hotel the Brijama Palace by boat.

You ascend from the ghats to the hotel lobby in the oldest lift in Asia which used to be pulled up by chain. The hotel has a very Rajasthan Mogul-empire style with ornately carved inner cloisters bathed in light flooding in from apertures set way above and expansive terraces giving amazing views of the mighty river, the Ganga Maa, below.

Our expert guides will take you to visit the key sites where, as is so often the case in busy Indian cities, the calm and peace of cool inner courtyards contrasts dramatically with the teeming life outside where sadhus, Brahmin priests, monks, pilgrims, worshippers, laundrymen, bathers and even the odd superannuated hippie jostle contentedly together.

Later you might like to take a private boat to watch the funeral pyres from a respectful distance. Only male family members attend. The senior relative is given the ashes to throw into the river, and as it gets darker the flames amidst the ashes take on a more Brueghel or even Bosch-like quality. But there is nothing frightening about this closing ceremony which is held in the very middle of life; indeed, if you return to the river on the next morning as dawn breaks, you will sense the serenity and peace born of so many coming together united by faith, devotion and a simple belief in the river’s healing, purifying and liberating properties.

Mark Twain visited and wrote:
“Benares is holy. Europe, grown superficial, hardly understands such truths anymore and I feel nearer here than I have ever done to the heart of the world; here I feel every day as if soon, perhaps even today, I would receive the grace of supreme revelation.”

ghat: a set of steps leading down to a river or lake.